Summer Salami is a popular salami also known as Thuringer. It is a semi-dry cured salami that is smoked after it is allowed to cure to develop a natural tang. It is very popular with hunters who use venison & elk meat and this recipe works very well substituting wild game meat for the pork. I would however make sure that all fat is trimmed from the meat and add the bacon in this recipe or you can use pork back fat. 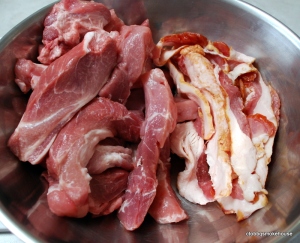 I use pork and pork back fat in my traditional recipe. Today I am using bacon ends instead of the pork fat to give it a little change of flavor. 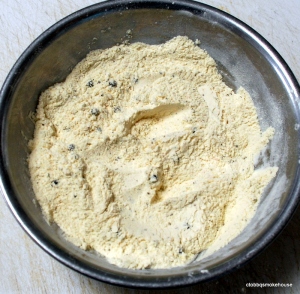 Mix all the dry ingredients together. 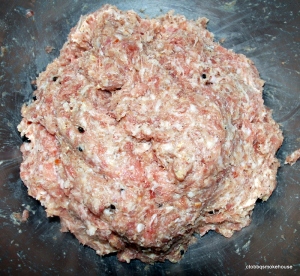 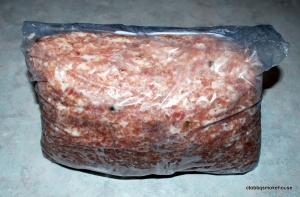 Grind the partially frozen meat and fat using a 3/8 grinding plate. Mix in dry ingredients and mix thoroughly. Place in a ziplock bag and pack tightly removing all air and sealing. Put in the refrigerator and let cure for 4 days. 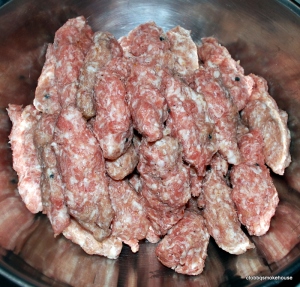 To make it easier to regrind the meat, I form little pieces that easily feed down the grinding tube. Grind and stuff the casings using a large grinding plate as the whole peppercorns need to pass through. 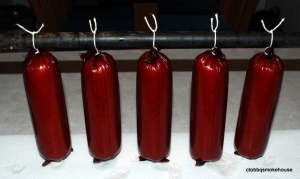 Hang salami on a smoke rack and let cure @ room temperature for 12 hours. 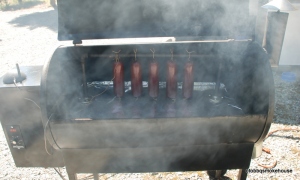 Insert a temperature probe into one of the salamis and place in smoker @ 110 degrees. When the internal temp reaches that, raise smoker temp to 125 degrees. When that temp is reached, raise smoker temp to 155. The salami is done when 155 degrees is reached. Remove salami still on the smoke rack and shower with cold water until the internal temp reaches 110 degrees. Gently wipe the salami with paper towels. 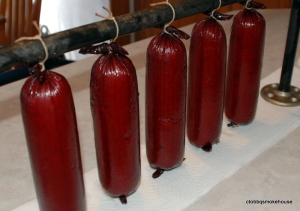 Let hang on smoke rack @ room temp for three hours to allow the salami to bloom. Store refrigerated. I like to vacuum pack what I’m not going to eat right away and place in the freezer. They won’t lose any flavor for up to 90 days.

Directions:
Cube pork, bacon & partially freeze. Grind with 3/8 grinding plate. Add the rest of the ingredients and mix thoroughly. Place in ziplock bag and let cure refrigerated 4 days. Regrind using a large grinding plate and stuff into casings. Hang at room temp for 12 hours. Smoke @ 110 degrees several hours then raise the temp to 125 degrees for about and hour. Raise temp to 155 degrees and salami is done when the internal temp is 155 degrees. DO NOT ALLOW THE SMOKER TO GET ABOCE 160 DEGREES OR THE FAT WILL START TO SEPERATE. Remove from smoker immediately and shower with cold water until the internal temp reaches 110 degrees. Hang @ room temp to allow salami to bloom.

This entry was posted in Salami, Smoked and tagged Summer Salami, Thuringer.

A Guide to Food Carts in Portland Oregon